5. Scientific Perspective & Clarity On The Main Door Facing The North-East

Usually the initial chapter of Vaastu Shastra deals with the Direction of the main door of the house, making it very important in the bargain. Several misconceptions have crept in and have existed earlier regarding the exact placement of the Main Door, amongst the majority of the population.

The illustration mentioned below using the figure of a house, demonstrates the details as above. 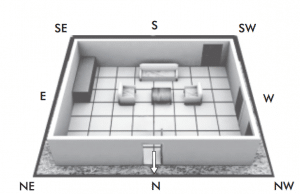 After closely observing the complete figure in the illustration, any lay person would be able to point out the Main Door in the figure that faces the North direction, as clearly seen in the figure. 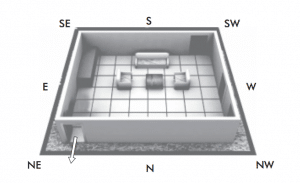 After observing Figure 2, it can be easily pointed out that the Main Door facing the North-east, which is the norm in most books on Vaastu. As a rational engineer with a scientific perspective, I will definitely not agree with this observation. 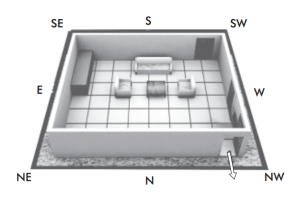 In figure 3, the pointing of the Main Door opening faces the North-west, that again is a preconceived notion that is quite commonly held by the majority of the people, but I totally disagree with this notion. Let me explain the reasons for my disagreement.

Here I would like to mention a quote by the well-known scholar and philosopher, his Holiness Sri. Siddheshwar Mahaswamiji of Gyan Yogashrama, Bijapur, Karnataka (India). In one of his speeches on Vaastu, he questions these rudimentary accepted beliefs by just removing the whole door from the center of the house and placing it in the North-east direction. What Difference does it actually makes? This is exactly similar to the Questions that we have earlier referred to in the figures 1, 2, 3. I too agree with Siddheshwar Mahaswamiji’s philosophy and will try to understand in detail the answers, through the Figure No. 4, as shown below 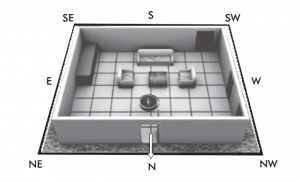 I would like to explain the method of finding the direction at a site. Generally a Compass is used to show the directions. If we look at Figure-4, when we hold the compass while standing at the door of the house, the compass will always point towards the North. 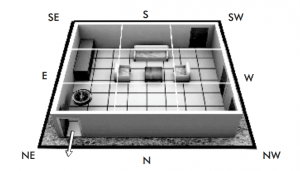 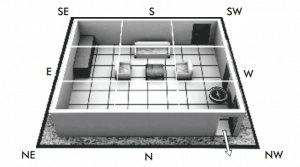 If we look at the direction of the door in Figure 6 as above, the points discussed previously holds good for this case too. Many so-called Vaastu scholars do not even know the use of the compass and are totally unaware about the scientific rationale of using engineering and architectural concepts in Vaastu.

As discussed previously, the direction of the main door is the basic tenet in Vaastu. The given example here clearly illustrates the fact that ambiguity and mistakes could be caused because of the relative above fact. In this context, I would like to compare the main door of a house to the ‘mouth in the human body’, that allows the intake of food and nutrients for the sustenance of the body. Now if heavens forbid, if something were to happen to the mouth, it would become extremely difficult for us to eat or drink. If we don’t take any food or water then our body’s metabolism would drop abysmally low and we would not be able to get any energy to do any task or even survive. As a result, out body would become extremely weak and frail. Similar is the case with the main door of the house. If the Main Door of the house faces the most unfavorable direction of any particular member of the family depending upon the individual’s Date of Birth; then obviously that person will have to face a lot of problems in the house. Rationally and scientifically this line of thought, has found acceptance among most of the practicing architects and engineers, as well as other experts of the construction and realty related fields. 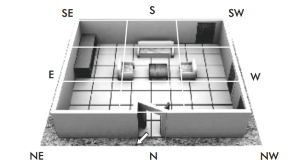 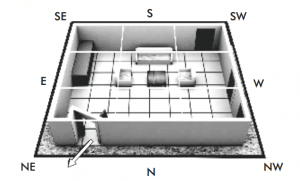 The main door in Figure 8, shows the door situated in the North-east corner & direction. 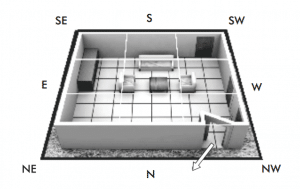 The main door in Figure 9, indicates its presence in the NorthEast direction of the North-west corner.

We clearly see in these illustrated figures, how people tend to get confused about the North-east Door. In Vaastu Shastra, ‘Identification of the correct Direction’ is considered as the ‘First Step’. Therefore going wrong with this very first step can create disturbances and upheavals, in the life of those living in the household. On the contrary, correctly identifying the direction, can minimize our problems to a certain extent, then and there only.

1. An Introduction About Vaastu Shastra

4. How Is The Saral Vaastu Concept Utilized For The General Good?

5. Scientific Perspective & Clarity On The Main Door Facing The North-East

6. The Cycle Of Life and Death Relationship With Saral Vaastu

8. Should ‘Puja Room’ Be Compulsorily Situated In The North-East Direction or Place !

9. Location of The Main Door & The Importance of Its Direction

10. The Impact Of Having Toilets, Bathrooms & Utilities Room In The North-East & It’s Importance In The World Of Vaastu Science